My holiday finally started and I had to set more than three alarms to wake me up at 5am. Waking up early to leave for the airport wasn’t as painful as expected as I was just too excited to travel. I got to Heathrow Airport early enough to have a decent breakfast and do a little shopping. I normally don’t buy too much at the airport apart from some drinks at the duty free, but I do love to explore the terminals.

My flight with American Airlines was with Boeing 757 – 300 from London, UK to Raleigh, NC, USA.  The journey took almost 9 hours which was a little bit long. But other than that, I was quite satisfied as there was no turbulence, the food was surprisingly good and they didn’t charge for drinks or snacks. Even through the plane was quite old the seats were relatively comfortable.  The only down side was there that there were no screens built in  to the seats so I couldn’t watch any movies or shows. ButI did get a great deal on the tickets so I can’t  really complain.

Clearing security was fast and easy and picking up my luggage didn’t take as long as it usually does at larger airports. After getting the luggage, I was dying for a coffee and luckily found a Starbucks on the first floor near the check-in counters. I would definitely recommend bringing snacks or food because until you’ve cleared security, there aren’t a lot of options for food or snacks within the arrival and departure areas of the airport. I know it’s a common thing for airports to keep all the good stuff hidden behind the security check-ins, especially in small airports. Fortunately, we didn’t have to hang out here long.

It was my first time in Raleigh and had it not been for visiting a family member I probably never would have normally chosen this city as a place to visit. However, I was pleasantly surprised! I was only there for a few hours but I loved it! It’s not a big city but it seems like there is a lot of going on. We went for dinner at Chuck’s, an amazing burger place which was very delicious and even served alcoholic milkshakes.  After dinner we took a walk through the city,  where I noticed a lot of curious bars and restaurants, all of which had their own unique flair tempting me to stop in for a drink. The final destination was The Raleigh Beer Garden which was absolutely amazing! While I am not big beer fan, I was impressed by the 366 beers on tap – it was not easy to make a decision! Next to beer they also offer a good selection of cocktails and food, an impressive roof terrace, and of course a massive garden decorated with lots of lights. It was very beautiful. On top of all of this, they had a number of American games outside including Corn Hole, a classic game similar to Horseshoes; the only difference here is that the objective is to knock your bean bag into the hold, and the other teams off the board.

Unfortunately I forgot take my camera that night so I don’t have too many good photos. But I will definately organize a longer stay in this city in the future. I want to explore it more and visit the Raleigh Beer Garden again!

Flying during COVID-19: London to Mykonos

Visiting Kerry in Ireland – Part I 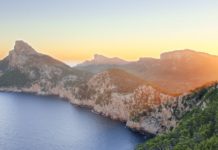 A Traveller’s Handbook For Visiting Mallorca