After enjoying all that Arizona has to offer it was time to continue our road trip across America. Stopping Nevada and then venturing on to the golden state of California.

Traveling to Reno was quite exhausting so we stopped in Vegas for a night. This time we stayed at the Treasure Island hotel which is known for its big outdoor show about pirate battles.

Driving from Vegas to Reno was marvelous but at some point the landscape is quite flat again. Don’t get me wrong, I loved seeing it all but after a few hours of the same scenery, it gets a bit boring. There were a few tourist shops along this route, selling the obligatory area 51 signs. We also hit a small sand storm which wasn’t too fun to drive though. Closer to Reno the landscape starts changing a little bit so we kept stopping to take some photos. We got to our destination with a 2 hour delay.

Reno is a small version of Las Vegas with more of a city vibe. It’s also closer to the mountains so it’s not as hot as it is in the south. It looks very nice from far away but when you get closer it’s actually pretty dirty and grey. Everything looks cheap and even the casinos look unwelcoming.

We spent one day walking around but it wasn’t exciting at all. The next day we drove to the haunted Virginia City. There is one main street for tourists where you can get to know some history, eat lunch and take funny photos. To get there you need to drive up to the mountains which is a plus as you get you see an amazing view on your way back down.

On the last day we visited Lake Tahoe. To get there from Reno you also need to pass a mountain range. The lake is extraordinary. There’s a reason they call it the jewel of Nevada. It’s the largest alpine lake and second deepest in America. The water is crystal clear and its mountain setting is gorgeous.

Our next destination was Yosemite National Park. We had some complications getting there because Google maps didn’t alert us about the fact that roads were closed due to snow on the top of the cliffs. What should have been a 3 hour drive turned into six hours. For the first 3 hours we drove around and up and down the Sierra Nevada. It was very cold and funny to observe the temperatures every few kilometers. We spent the last 3 hours driving through forests and rolling green hills.

Yosemite was wonderful. We didn’t have enough time to see everything, in fact, we probably didn’t see most if it (they say even 2 weeks is not enough), but we saw enough to leave an impression. Huge rocks, the breathtaking view from the mountain tops and waterfalls. We also went on a little hike, but we only made it to the first stop which was located 1, 3 km away.

I wish we had had more time to explore. Tickets cost 20$ and you can even camp there. There are signs warning of possible nightly-visitors such as bears. Next stop, San Francisco!

Checkout some of the great deals at Yosemite below

This is the city I was most excited about visiting. It is said to be the most European city in America. Entering the metropolis via the Bay Bridge, I felt like I was in Malta. The pale yellow and colored small houses on the hill reminded me so much of the Mediterranean island. But as soon as I saw the downtown area I was reminded of being in America again. On our first day we got to our hotel after two hours of driving. It looked like it was possessed! Luckily there were no special effects during our stay. The only attraction we decided to see that day was Twin Peaks hill, which reaches up to 281m. This was the prettiest view of a city I’ve ever seen.

Don't have time to drive? It's definitely worth flying out to California if you have never been. You can search for flights in the box below.

On Monday they announced very strong winds but it didn’t stop us from taking a long walk. We started from Union Square and made our way downtown. As is typical of any big city, there were many tall, modern buildings and business men in suits. I really liked the tower block called Transamerica Pyramid.  From here we visited Pier 39 and Fisher Wharf, which is situated on the coast. We had lunch at a Crab House restaurant where we got a full crab and fish and chips.

It was quite expensive and the food wasn’t anything special. We went on to admire the infamous Alcatraz prison from the distance and checked out a few souvenir shops.

Later on we visited Japan Center in Japan town. We had a nose around some of the grocery shops here where you can buy green Kit Kat, but it was very expensive. We bought milk candy (it tasted like condensed milk in a can), Hello Kitty dipping sticks and seaweed & salt chips. We also took some funny photos in a Pika Pika photo booth that allows you to edit and apply silly stickers to your image. We finished the day at the Alamo Square with the famous view from Full House.

On Tuesday we drove to the Golden Gate. We took a few photos from both sides of the bridge and went back to a city center. We had lunch in an Irish pub and walked around.

San Francisco definitely made it on my list of top five cities in America. It has a European vibe to it but still feels very much like part of the USA with its tall buildings, cheesy, cheap looking shops, and sketchy neighborhoods. I don’t know if I would want to live there but I’m always happy to visit.

The route 1 is one of the most beautiful roads in the world. It stretches along the west coast where the mountains meet the ocean. We chose to drive it from San Francisco to Los Angeles. The whole journey took 10 hours so we stayed in Santa Maria for a night.

We hadn’t planned on stopping here but decided to check it out after all. That was my first encounter with a typically western seaside village. There’s a long pier, with several shops and a boardwalk with a fairground. It’s usually very touristy but when we got there it was empty. It was off season so a lot of shops and attractions were still closed. It was worth a look but I am glad we didn’t plan to stay longer.

After a night in Santa Maria, we stopped in Santa Barbara. There’s also long pier with attractions but not much else, just a beach with a skate park. We also visited downtown which was much prettier than the coast with cute shops, restaurants and charming buildings

I’d heard a lot about Santa Monica from movies and TV shows and the beach definitely did not disappoint me. When we arrived we started by exploring a big shopping center located very close to the seaside before heading to the coast and the famous Santa Monica pier with its fairground and many restaurants. A long promenade stretches all the way to Venice Beach, where you can witness all the typical, super fit Californians cycling, jogging or skating.

There are so many great places to stay in California.

We walked here from Santa Monica, and the first thing we saw in the pediatrician area were street artists selling paintings and other hand-made things. It was full of inspiring musicians who handing out their demo CDs and people playing piano, drums or guitar. There were also kitschy shops selling t-shirt, mugs and magnets. The beach looked beautiful: palm trees, golden sand and a huge skate park.

When I did my research for our trip I read about a lot of people saying Los Angeles is not worth a visit. The city has been described as dirty and dangerous, but I am glad I didn’t listen to them. Originally we had planned to stay there for just one night but we extended it our stay by two days and I’m pleased we did.

After a day at the beach we went to our hotel Holiday INN in Burbank. The next morning we went to Warner Bros Studios. We chose that over Universal Studios as I am not a big fan of roller-coasters, and the tour of film sets was shorter. We got our tickets and looked around the gift shops before being ushered into small room where we watched a 15 min movie about the history of the studio and what has been going on there over the last few years. Next we met our tour guide who took us to his large golf cart. We started with a building that served as an office, school or airport. Then we went to the woods were there were houses I recognized from TV shows such as Pretty Little Liars.

We left the forest and visited production halls where shows like Friends, Ellen and The Big Bang Theory are recorded. We also saw a few cars from movies like Batman and Austin Powers, as well as the Harry Potter Museum and streets which looked like real cities across America.

Our tour guide was fantastic. He played scenes from different TV shows to make us feel like we were part of it. He imitated Sheldon from The Big Bang Theory, Michael Jackson in the Pepsi commercial and Jim Carey’s The Mask. I hope to see him on TV one day as he was definitely a good actor. The whole tour took 2 hours and cost 50$ per person.

Next up, it was time for the big HOLLYWOOD sign. To get a good view we drove to the Canyon Lake Drive. After a quick photo-shoot we arrived at the Hollywood Boulevard where we visited the Chinese Theater that screens all the premieres and the famous Walk of Frame. We decided to have lunch in Beverly Hills. I was hoping to see someone famous and I was kind of lucky. While we were sitting in a restaurant I saw a hoard of paparazzi running towards someone from the window. They started taking photos of some tall girl who was waiting for her car. Unfortunately I have no idea who she was but I guess a model. After lunch we had a quick ride around Rodeo Drive before heading to Universal City for dinner. It was a tiny little town next to the studio with some bars, restaurants, shops and attractions.

It was very intense day in LA. We didn’t go downtown which is probably a good thing as it was recommended to avoid it. I left the city with a very positive opinion and I hope I will get to come back this way some day. 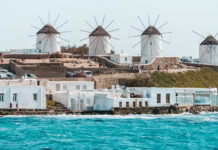 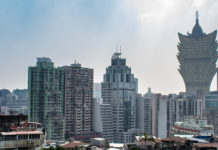 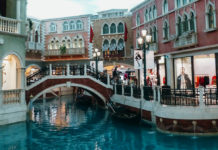