Home Featured Holidays An immersion in the city of gold – Dubai

I was wrong when I thought two days is enough time to see the main attractions of Dubai. When you look on the map everything looks very close, but when you get dropped off by a taxi almost anywhere in Dubai you can get lost relatively easily.

The flight from London was long but very smooth with virtually no turbulence. We took off from London Gatwick airport with Emirates airlines. It was my first time with Emirates and my first time on the world’s biggest commercial plane, the Airbus A380. I was looking forward to seeing the famous flight attendants with their characteristic uniforms. The plane was beyond impressive; it looked to be very new. When I walked on board the pretty stewardesses warmly welcomed me. I was then immediately dazzled by the golden stairs leading to the upper deck of the plane for business and first class. The other positive aspect was they had WIFI on board for the whole flight for just $1! It wasn’t the fastest internet but I can’t complain, as it was better than nothing.

Upon landing in Dubai I couldn’t wait to see what the airport would be like. Unfortunately Dubai airport was surprisingly empty and quiet. As it’s a main stopover for Emirates flights to Asia I was expecting there to be a lot of people around. At least I got to collect another new stamp in my passport.

After picking up my suitcase I headed down to find a taxi to take me to the hotel. The taxi stand is very easy to find, and there are a lot of them so you wont have any trouble getting one. The only thing to be mindful of is that they may charge you a surcharge of 25 AED from the airport but not on the return. The journey from the airport to the hotel cost us 60 AED.

We stayed in the JW Marriott hotel near the Burj Khalifa in Business Bay, which apparently is the tallest hotel in the world. After we checked in we decided to eat some dinner; however, we didn’t know where we could go as we arrived so late in Dubai.  The hotel had a few options but we wanted explore Dubai a bit even though it was quite late. We decided to try Dubai Mall which was not too far away.

We got to the mall around 11pm and unfortunately most places started closing so we just got a non-traditional dinner… hamburgers. Instead of taking a taxi back to the hotel, we decided to attempt to walk back. Normally I love walking and I didn’t even mind walking the 3km back to my hotel, but the city it is literally like walking through a maze, between all the construction, blocked roads, motorways, and little streams or rivers you can’t simply just walk from one place to another so easily. So even if you see something on your map saying it’s a short distance don’t believe it. If you don’t know where you going you might be walking for few hours.  We got lost a bit but somehow we managed to catch a taxi and come back to hotel.

To end the night we decided to head up to the 72nd floor to a bar called Vault in the JW Marriott. What a better way to end the 1st day in Dubai than with cocktails and an amazing view over the city in the world’s tallest hotel!

So for my first day impressions: 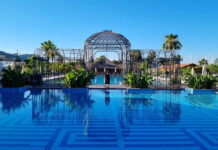